How exactly is this new React Native architecture relevant to your apps' performance?

And what about your app development process? How does this re-architecture affect it?

In other words, what benefits should you expect from this update?

I've identified 8 major gains, that you can find listed here below:

1. But First: A Quick Overview of the "Old" Architecture of React Native

Here's how React Native — the open-source cross-platform solution developed by the Facebook team — used to work: 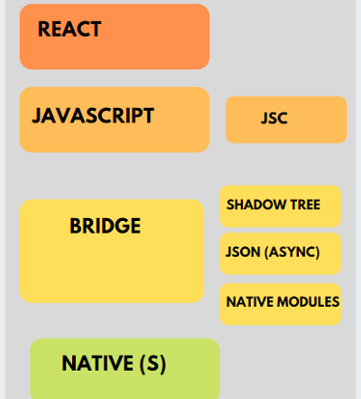 Basically, the old React Native architecture was standing on 3 key... pillars (or 3 threads running in parallel):

In order to make the communication between the Native and the JS thread possible, you had to use a C++ module: Bridge.

Here's how it works:

The inconvenience? The very reason why a new React native architecture was needed?

This bridge-based structure is prone to delays.

Threads based on a JSON signal stream get sent over a Bridge asynchronously, but certain events on the JS thread can block the UI events.

Also, actions that require synchronization between the JS code and native can get delayed precisely due to the time needed for the data to get transmitted over a bridge.

"What benefits are expected with the re-architecture?"

The most interesting change has been replacing Bridge with JavaScript Interface (or JSI).

And now, here's what you gain from this update:

Summing up the benefits, you get:

... all bubble up to your apps' performance, on one hand.

And toyour overall experience as a React Native developer, on the other hand.

What are your own thoughts about the new React Native architecture?

Have you already tested these improvements?

Feel free to share your first impressions in the comments below.